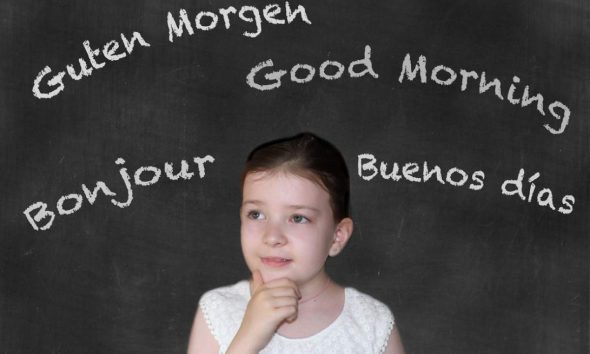 Raising a bilingual child is a big commitment, and it can be challenging. But your decision to teach your child more than one language is a gift that can offer tremendous advantages. In this post, we’d like to set the record straight on five common myths about bilingualism.

Myth #1: There is no proof that learning a second language is beneficial.

To the contrary, the evidence for the lifelong benefits of learning a second language, and even a third and fourth, is overwhelming!

Bilinguals and multilinguals benefit from larger gray matter (the area of the brain responsible for higher level reasoning), improved performance on math and science tests, stronger communication skills — after all, how could being able to communicate with people in their native language not be an advantage? — and superior social skills.

The body of research that uncovered these benefits, along with a long list of others — like prolonging the onset of age-related dementia, for example — is too lengthy to include here. Instead, we encourage you to check out this Infographic. Suffice it to say, learning to speak, read and write in a second language is a gift that gives your child a multitude of academic and social advantages.

Myth #2: A child can become fluent in a second language just by hearing it at home.

While it’s no doubt true that children who hear a second language at home, whether from a parent or a grandparent, may become conversational in that language, they likely are not fluent.

You may have heard the stories of American-born children of European immigrants who arrived in the United States in the early to mid-20th century.  Many of those children grew up hearing their parents and relatives speak their native languages, but the children themselves never learned to speak them, or didn’t learn to speak them very well. As adults, they may be able to order a meal in a restaurant using their second language, or carry on a simple conversation with a relative, but they aren’t able to confidently speak, read or write at a college level or in a business setting.

When young children learn a second language, their brains develop separate but parallel pathways for each language and they learn to speak both languages like a native speaker. As children get older, this “window of opportunity” begins to close, making it more difficult (although not impossible) to become fluent in another language.

So while we wholeheartedly encourage speaking a second language to your children at home, it will be substantially more difficult for them to develop into fluent speakers and writers without being repeatedly exposed to the language in school.

Myth #3: Parents must be fluent in a language to raise a child who is fluent in that language.

The more a child hears another language, the better. But that doesn’t mean that your child can’t become fluent in a language that you don’t speak at home.

Let’s go back to the example of the American-born children of immigrants. Although the immigrants themselves did not usually speak English at home, their children grew up to become fluent English speakers and writers.  What was the key? Early exposure at school, as well as making English-speaking friends.

Children who begin learning a language in pre-kindergarten and kindergarten, and continue with the language for as long as possible, are set on a path to fluency and literacy regardless of whether mom and dad speak that language at home.

At German International School New York, we are able to witness firsthand how quickly children acquire a second language. Every year we welcome children into our Pre-K and Kindergarten classes who do not speak German, as well as children who do not speak English, and by the end of the year they are effortlessly playing with their friends in their new language.

If you and or your partner/spouse don’t speak the language that your child is learning in school, look for opportunities to expose your child to that language outside of school. Language playgroups are a terrific way for your child to meet new friends and reinforce budding language skills. This is one time when peer pressure can actually be positive!

In fact, the opposite is true.

Do you ever find yourself struggling to think of a word for something? Well, bilingual children have a whole second set of words from which to choose! If they can’t think of a word or phrase to express what they mean, they can draw from their second language.  This “mixing” of languages is completely normal – it usually happens in the early years as a child learns two distinct vocabularies – but, rest assured, it’s temporary.

By sixth grade, the average bilingual student outperforms his or her monolingual peers and excels on math and science exams. Scientists don’t yet know the precise brain mechanisms or processes that are responsible for this enhanced performance.  The prevailing hypothesis is that thinking and speaking in more than one language requires the brain to become very flexible. This flexibility correlates strongly with memory and problem solving ability, both of which math and science require in large doses.

Very recently, researchers from Cornell University and the University of Chicago found that bilingual children have superior communication and social skills. We won’t go into all the details of the studies here — if you’d like to learn more about them, we encourage you to read this article from The New York Times. In a nutshell, though, the researchers found that children who grow up in bilingual and multilingual environments are more likely to consider the perspectives of other people than are monolingual children.   Why?  According to Katherine Kinzler, the author of the article, “Multilingual exposure, it seems, facilitates the basic skills of interpersonal understanding.”

Myth #5: If I want my child to get into a top-tier American university, he should focus only on English.

If you just read our explanation for why Myth #4 is false, then it shouldn’t come as a surprise that bilingual students actually stand out from the crowd when applying to colleges and universities in the United States.

Competitive American colleges and universities, particularly those considered top-ranked, value students with unique backgrounds who have distinguished themselves by becoming fluent in more than one language.

Since 1980, German International School New York (which offers the German International Abitur and the NY State High School Diploma) has helped thousands of graduates apply to colleges and universities in the US and abroad.  Our graduates are bilingual, and often trilingual, and have been accepted to Harvard, Princeton, Yale, Columbia, NYU, Brown, Stanford, MIT, Julliard, Sarah Lawrence…the list goes on.

We’d like to make one final point about this myth. Before you rule out European universities in favor of American ones, just consider this: most European schools offer free tuition.  That could translate into a savings of $100,000 or more!

Dr. Simone Bruemmer is the Head of the Lower School at German International School New York where she has been instrumental in opening the school to a diverse group of international families who are united by their love of German language and German, Austrian and Swiss culture.  She holds a PhD in Psychology and is an expert on early childhood and bilingual education.  Dr. Bruemmer is passionate about instilling international values in her students while preparing them to meet the challenges of a complex, global world.

Sarah Wrede is a writer and brand consultant/designer.  She and her husband moved to White Plains from NYC so that their boys, ages 9 and 7, could attend German International School New York beginning in kindergarten.  Although Sarah does not speak German, she is thrilled that her sons are growing up bilingual and marvels at their ability to switch effortlessly between two languages and cultures.

The Lifelong Benefits of a Bilingual Education