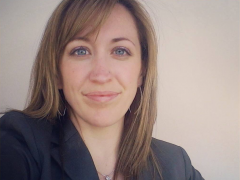 Betty Jeanne Rüters-Ward works as an organizational consultant, community organizer, and professor. She grew up as German-American in the Boston area and now resides in Brooklyn with her family. Beginning in January 2018, she will lead CityKinder’s “Baby’s Erste Jahr” (Baby’s First Year) groups in Brooklyn.

Betty Jeanne, you’re an American but you speak German without an (American) accent. How did that come to be?

My father is an American and began studying German in ninth grade. While at university he studied in Marburg for a year and met my mother, a German university student. They decided to move to the United States and raise their children – my brother and I – bilingually.

Though there wasn’t a German school in our area, they gave a lot of effort for us to not only speak but also read and write German. Our German relatives offered support: During each visit my grandmother gave us money to choose German books. My aunts recorded videos of 80s and 90s German television and mailed them to us. My cousins gave us their audio cassettes (of books on tape). We had both children and adults as penpals, and we flew to Germany each summer.

Now that I have children of my own and hope that they’ll become at least somewhat bilingual, I appreciate just how well my parents pulled it off. I’m very grateful

Which language did you speak most in  your childhood, and how do you handle that now as a mother?

I generally only spoke and speak German with my parents. We only speak English with one another when someone with whom we’re in conversation doesn’t understand German. My American friends have often experienced my parents and I speaking German in front of them.

My brother and I had the advantage that we could choose from and switch between our sibling language. We even had a secret language (German) that no one at school could understand. As an uncle, my brother now speaks only German with my children.

And now I speak only German with my children. They hear plenty of English – from my husband, between my husband and I, at daycare, and so on. Because my children don’t have as much access to the German language as I did as a child, it’s important to me that they hear as much German from me as possible. When I first became pregnant I learned at a workshop of City Kinder and Deutsches Haus NYU about the OPOL (“One Parent One Language”) method – which is what our family now uses. I also ask German speaking relatives and friends to speak German with my children.
Because I don’t only want to pass along the German language but also the German culture, I’m grateful for CityKinder. We look forward to family events like the St. Martin Lantern Walk, the parties for Christmas and Fasching (similar to Mardi Gras), the picnics in the parks, and other opportunities to build our German-American community.

Did German culture become more important to you as you got older?

As I got older and no longer lived with my parents, it became more and more important to me. Sometimes days, or even weeks, would go by without speaking or hearing German. I missed it. I began to read novels in German to improve my vocabulary and to understand life in Germany a bit better. The first novel I read (as an adult) was one my cousin had given me, titled “Bis(s) Zum Morgengrauen” (the phrase translates as “Until Dawn” but the first word is a play on the word “bite”). At the time I read German rather slowly, so it took quite a while until I realized I was actually reading the American book “Twilight!” As a young adult I also saved my first earnings to travel to Germany as often as possible to visit my relatives and experience German culture.

When I later became prengnat, it became even more important to me to be able to pass on the German language and culture to my children. I was so happy when I found CityKinder.

As a child, did you see it as an advantage or a disadvantage to grow up bilingual? Where there situations that you remember particularly positively or negatively?

As far as I can recall, it always felt like an advantage to be bilingual. I had insight into a different, additional world: Germany, and the broader German/American diaspora. And as an American, there was something unique and special about me – as there was about my friends who spoke Chinese or Spanish with their families.

My parents can only remember one situation where I saw my bilinguality as a disadvantage. I was rather young, and hadn’t been in the U.S. (English-language) school system long. I wanted to share, as my classmates did, about what I’d done the previous weekend, but I was lacking a few of the English words. At the time my German vocabulary must have been larger than my English one. “Ich hörte mich zu Deutsch-isch an!” (or roughly translated, “I sounded to German-ish!”) I lamented to my parents. I don’t remember that incident. And other than that, I didn’t have any trouble with the English language: I heard it often enough in school, among my friends and in the media.

Was there a German community in Boston during your childhood?

I grew up in the Boston area during the 80’s and 90’s. There were some offerings like a German grocery store, a German restaurant, and an outpost of the Goethe Institut (Germany’s cultural institute, which operates worldwide), but otherwise there wasn’t much. There was an international newsstand new Harvard University where you could buy German newspapers, but they’d be somewhat out of date.
My current neighbor, whose grandchild is the same age as my kids, lived as a German-speaking mother in Brooklyn during the 80’s and 90’s. There wasn’t yet something like CityKinder in NYC. Instead, my neighbor would meet up with other German families for coffee, conversation, and play – an informal playground, if you will. They met in the German church in Brooklyn Heights. Years later – a whole generation later – I’m thrilled to soon host a new playgroup for parents and babies at the same church.

And that’s why you’re now involved in the German community?

I’m involved in the German community because it’s very important to me that my children will understand as much as possible about German language and culture – and about their own identity and family. In addition, multilinguality has many cognitive and social benefits: it fosters empathy and understanding for different kinds of people.

Because my husband and I speak English with one another, and because we can’t get to Germany that often, we’re looking for other possibilities for my kids to connect with German. The seminars, events, and playgroups we access through CityKinder have helped a great deal. I’ve built a network of other German-speaking moms with whom I’m in touch almost daily. We support one another and our children sometimes play together – and it all happens in German. I also learn from these parents more about German culture – and, I can offer these European ExPats my own expertise about American culture.

I’m especially excited to launch a new “Baby’s Erste Jahr” (Baby’s First Year) playgroup in Brooklyn. I experienced this class with each of my children – it really helped me as a new mom. The group offers movement and music for the babies, emotional support for parents, and tips and resources for raising kids in New York – and it’s all in German. Now we’re offering, for the first time, a group in Brooklyn Heights that’s accessible not only from Brooklyn but Manhattan, Queens and New Jersey. I look forward to supporting fellow parents, singing German childrens songs with the babies, and further building the German-speaking community around NYC.

Can you recall particular (German) books or songs from your childhood, that your mother or father introduced you to?

Each time we visited Germany I was most excited to buy audiobooks at the supermarket – the “Bibi Blocksberg” and “TKKG” series.

But the most significant impact has been made on me by the book “Momo” by Michael Ende. I can recite some parts of it by heart: “Es war eine lautlose und unmerkliche Eroberung, die tagtäglich weiter vordrang, und gegen die sich niemand wehrte, weil niemand sie so recht bemerkte. Und die Eroberer – wer waren sie?”

I first thought of this book as a children’s story, almost a fairy tale: “The stragnge story of the time-thieves and the child who brought the people back their stolen time.” However, as an adult I understand “Momo” quite differently.

As a theologian, I’m interested in what this story – which I find to be rather timeless and universal – has to tell us about our world, and life in it. I once gave a sermon about “Momo” at a church on Manhattan’s Upper East Side, and the congregation reacted strongly. Most of them had never heard of “Momo” – if they knew Michael Ende at all, it was because of his book “The Neverending Story”. But the story of “Momo” touched them, deeply. It meant a lot to introduce this particular piece of German literature to an American audience. The only way to fully communicate the story’s significance to me was to read some of it aloud, in German. Though others might not understand the meanings of the words, I wanted them to hear the same vowels and consonants that brought the story to life for me as a child.

Would you describe yourself more as an American or as a German? What are the aspects that you’ve adopted from each culture?

I see myself as 100% German-American. I’m not one or the other – I’m continuously reminded of that. When I visit Germany, it becomes clear to me that I don’t quite fit in there – I’d sooner fit in with American rather than German culture. But in my life in the U.S., there’s something missing that can’t quite be captured or understood in the English language alone. To understand and acknowledge my full identity, I have to be both. So, I live in the German-American diaspora. That can sometimes be challenging, and lonely: some part of me is always missing or elsewhere, or I might sometimes feel as if I’m “not German enough” or “not American enough”. Bu tit’s also something very special: I have access to more of the world, and to more of humanity. I have more than one “home” in every sense of the word.

Betty Jeanne, thank you for this great interview.